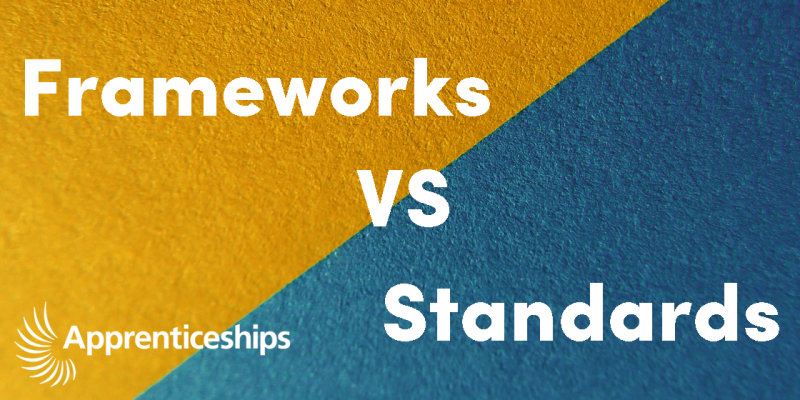 The theme for National Apprenticeship Week 2020 is “Look Beyond”. This theme can be interpreted in different ways; it could resonate with the younger generation to help them look beyond traditional routes to employment such as University, but it could also be for those who are already in the working world.

Many people still associate apprenticeships with the traditional, framework-based style and don’t realise how much they have been revolutionised over the past few years to reskill, upskill and hone the skills of experienced professionals through apprenticeship standards. In fact, 58% of employers believe their middle and senior managers would be unwilling to be labelled as an ‘apprentice’, despite there being great leadership & management apprenticeships available!

With so much confusion over how apprenticeships have changed, and what the difference is between a framework and a standard, we thought we’d put a handy list together…

1. One of the questions people ask most often is “What’s the difference between a framework and a standard?”

To put it simply, a framework is qualification based, and focuses on the learner ticking a series of boxes to achieve the apprenticeship, which would then result in a qualification. Apprenticeships often include multiple elements such as a knowledge-based element and a competency-based element which are certified separately (for example a BTEC for knowledge-based and an NVQ for competency-based).

A standard, however, transforms this traditional approach. Instead of focusing on ticking boxes to receive a qualification, standards are occupation focused. This means that a learner needs to demonstrate how they have developed their knowledge, skills & behaviours specifically for (and in) a workplace setting. Essentially, learners must demonstrate that they are fully competent in their role to pass the apprenticeship.

2. Apprenticeships are no longer just for 16-25 year-olds! Apprenticeships include a range of levels, going all the way up to Level 7, which is equivalent to a master’s degree.

With the introduction of the Apprenticeship Levy in 2017, apprenticeships are a great way for larger employers to develop their current employees using funds that are often deemed as a ‘tax’.

As of January 2020, smaller employers are able to access the Apprenticeship Levy funds that larger organisations have paid in but not used. This access is not guaranteed for every company, as they will need to go through an application process. Alternatively, levy-paying organisations can directly transfer funds (up to 25%) to SMEs in their supply chain, allowing smaller business to use these levy funds.

Find out more about the Apprenticeship Levy for both levy-payers & SMEs.

3. For employers, the biggest difference between a framework and a standard is likely to be how learners are deemed ‘competent’ to pass an apprenticeship.

A framework isn’t focused on long-term skills – learners are only required to think about the required skills & understand the theory, and then be able to put it into practice once – often in the form of an activity such as an essay. If this process is satisfactorily completed for every module, the learner will pass their apprenticeship.

A standard, on the other hand, requires learners to continually demonstrate their development throughout the programme. Then, at the end of the programme, the learner’s skills, knowledge and behaviours are thoroughly tested at an End Point Assessment, where they must prove they are capable of carrying out all aspects of their job to complete the apprenticeship.

4. The involvement of ‘Trailblazers’ in apprenticeship standards.

These are apprenticeships that were “created by industry, for industry”. This is where groups of employers working in a specific sector have come together to design standards and assessment plans based on the real-world requirements of an occupation.

This approach has resulted in apprenticeship standards that are aligned to the needs of actual employers, and will provide learners with the knowledge, skills and behaviours that will make a genuine difference in their day-to-day performance.

5. The experience a learner receives is hugely different between a framework and standard.

A framework can be unstructured – as a learner progresses and is ticking off elements to complete modules, they’re likely to find themselves jumping between modules, re-doing work that may not have passed the first time, as well as trying to complete their current modules. This can result in learners who have obtained a qualification, but haven’t been on a journey of change.

A standard takes learners on their own individual journey to develop their knowledge, skills & behaviours. Learners complete 20% off-the-job learning in the business. This means that, whilst they must cover all of the areas in a standard, they are able to place a focus on the areas they feel they are weakest in. Learners will also be able to see their own development in a workplace setting throughout the entire programme.

For employers looking to get a better workforce, apprenticeships could be the answer.

If you’re looking to develop your Graduates, Leaders & Managers or Sales people, get in touch to discuss our programmes!